I am so excited to announce that a number of my paintings have been selected to be screened on the digital tower at Yagan Square in Perth city over the coming months. The digital tower is seen by 60,000 people each day!

I was treated to a special viewing of my artworks during twilight this week.  Wow!, how surreal to see my paintings up on this impressive tower set amongst the city skyline of Perth.

Thank you to Screenwest and Yagan Square for this incredible opportunity.

Some of the original paintings featured on the screen at Yagan Square are available for purchase.  Details are on the Artworks page of my website.  You are also welcome to contact me on email sue@suehelmot.com.au 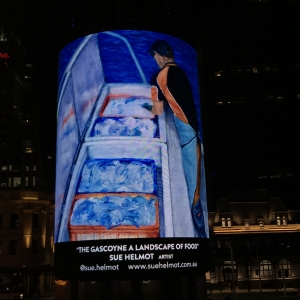 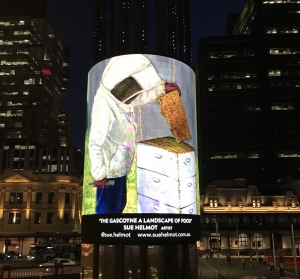 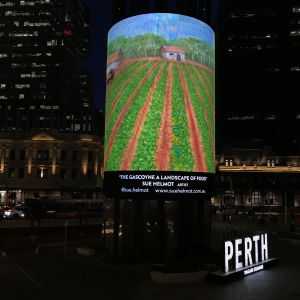 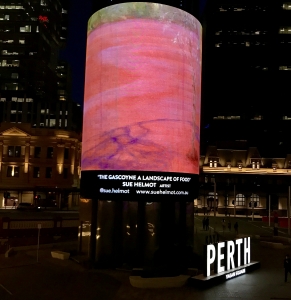 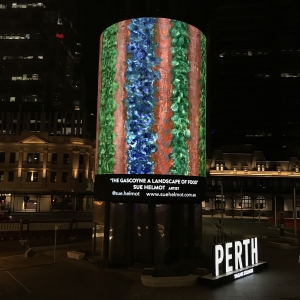 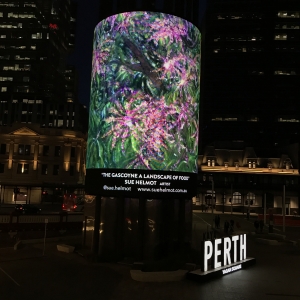 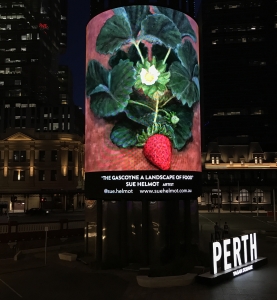 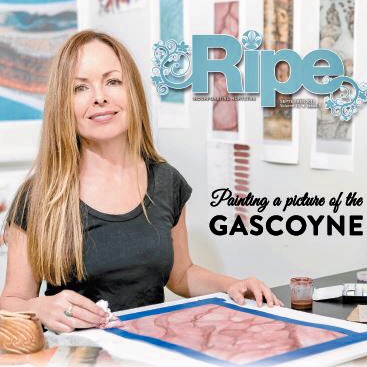 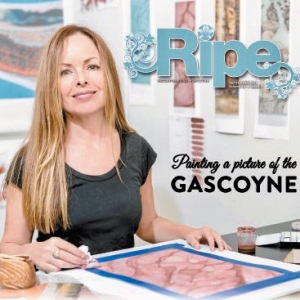 Thrilled to have my recent work featured in the latest issue of Ripe, a monthly horticulture and lifestyle magazine published by Farm Weekly, WA’s biggest rural newspaper.  You can imagine my surprise when I popped up on the front cover!

Thank you to Mollie Tracey and the team at Farm Weekly. 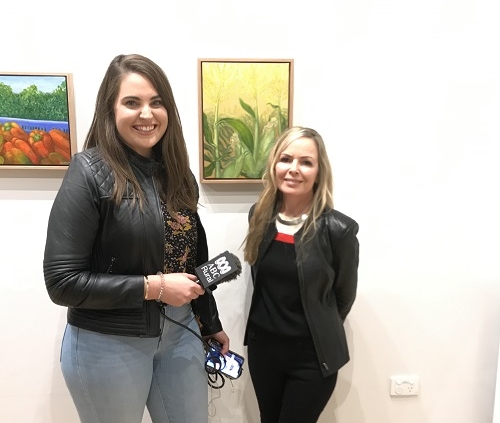 KELLY GUDGEON: Have you ever seen a mango flowers in bloom? Or been up close and personal with a beekeeper? Neither had Carnarvon artist Sue Helmot… that was until she took on a two year stint as an artist in residence for the Gascoyne Food Council. As part of her residency, Sue sat amongst rangelands shrubs watching for goats, and immersed herself in the local corn harvest. She put those experiences to paper as part of her art exhibition frontier of food.

SUE HELMOT: So primarily my work is about capturing different aspects of food production in the landscape within the Gascoyne. So that’s ranging from scenes in horticultural areas, through to pastoral stations, and seafood predominately. So my body of work is a culmination of the work that I’ve been doing since September last year. And I’ve been going out and visiting, for instance the works we’re standing in front of here now are works that I did going out and visiting some of the plantations in Carnarvon. So we’ve got the mangoes as they were, the trees were blooming in spring last year. They’re actually blooming again now which is pretty spectacular – it’s like a big massive fireworks display it’s really quite striking. I didn’t actually realise that until I went out there, I wasn’t quite so what’s going to see and I was just blown away.

MICHELLE STANLEY: But you’re from Carnarvon, aren’t you? So you should be able to see it all the time!

SUE HELMOT: I’ve been here twelve years but it’s amazing how you just don’t get out to see these things. I mean we have a little mango tree in our backyard, but when you see rows and rows and rows of these trees all doing it, I think the impact’s quite different from one or two little trees in your backyard.

MICHELLE STANLEY: And you’d be able to see it in a completely different light when you’re looking at it for something to paint.

SUE HELMOT: Absolutely yeah, I think it’s the scale. When you go out to the plantations everything’s on such a big scale. So that’s part of the intrigue and mystery – when you’re kind of wandering through these rows of these beautiful trees, and the same when I was wandering through these rows of sweetcorn, there’s bit of mystery around it because it’s almost a but surreal. And as I was there and I was immersed in these rows of sweetcorn, I just lose track of time to be honest. I just get really absorbed in it and I start making little colour studies that I can take away to record what I’ve seen with the colour to work up my larger oil paintings and the sun started setting, so I thought “oh god I’d better hurry up, it’s going to be dark soon,” and then I looked up as the sun was setting and the tassels – the bits at the tops of the corn plant – were just glowing because the golden light from the sun as it was setting was just beautiful and it was making them look like these little golden beacons, and I just looked at that and thought “wow this is what I want to paint,”.

MICHELLE STANLEY: It brings new meaning to ‘seeing something in a different light’ as well because you’re able to see it at dawn, at dusk, in the height of the sun.

SUE HELMOT: Yeah absolutely, it’s just completely different and something that you just wouldn’t normally have the opportunity to see, really. And the same with the capsicums when I was going out to see them being harvested, just the scale again. These massive tubs full of these beautiful capsicums, and just the way the sun was hitting on them. And the colours, the reds and the oranges and the greens, were just really glowing. And in contrast to some of the other things you see in that scene, it’s really striking. And that’s a sort of beauty that I want to capture and share with everybody else.

MICHELLE STANLEY: And in these artworks that we’re looking at, we’re seeing some corn in the field, and even a beautiful strawberry amongst the leaves as well. It’s all very calm and still, but you were on working properties in the middle of the day while they were busy. What was that like?

SUE HELMOT: Yeah it’s really interesting. I guess I just get into my little zone and so I’m aware that everyone’s really busy around me and I’m just conscious of not wanting to interfere with that because I know they’ve got their routine and they’ve got to get everything in and out in that day or whatever the case might base so I just in my little spot and just create a little kind of quiet calmness to see my own mind, and once I’m into the painting it’s really quite a mindful activity where anything could be going on around me really and I probably wouldn’t be that aware of it really you know. It’s really nice that you picked that up because I think that does sort of reflect in the work a little bit – that sense of calm.

MICHELLE STANLEY: Did you learn anything about our primary producers, about our horticultural growers around the region in the work you were doing?

SUE HELMOT: I knew little bits about what they do, but it’s more around the attitude. I think it just really reinforced to me they’re as passionate about what they do, as I am about what I do. It’s that important to them, and it’s that important to – it’s their life, it’s their families’ life. It’s not one or the other, it’s all encompassing. I think it’s more around that emotion, that’s probably what really struck me the most. The technical aspects I probably already had a fairly good understanding of how they harvest the crop or how they do those production elements but yeah it’s more around the people themselves and how they deal with it, and how that fits into their lives. And how diverse the food production industry is here too. I mean we sort of do know that but until you actually see all these different crops and different things happening, and on the scale they’re happening I think you don’t get a full appreciation of that.

MICHELLE STANLEY: Listening to some of the speeches earlier tonight – this is the opening night of your exhibition which will be running for the next two weeks in Carnarvon at the library and gallery – it was mentioned, talking about the Mardathuna Hills and that sort of landscape. What’s been the reaction from the people, I mean the people who are here tonight are the people who grow those crops, what’s their reaction been to your work?

SUE HELMOT: It’s been really amazing for me because it’s really stuck a chord with them because they’ve immediately identified with it, which is the best thing that I can hear as an artist – that it has struck a chord with them. I mean for Burke to say he felt that he was there in that landscape again, and I know Sue and Eddie who own the plantation where I went out to get the inspiration for the mango tree in bloom, they were drawn to it straight away and just said “oh wow, that’s it, and in actual fact you’ve made it even look better than it is,”. Just to see their faces, the smiles on their faces and the glow in their eyes, that’s enough for me. It’s just wonderful. It’s very rewarding.

MICHELLE STANLEY: This has been your second year, being the artist in residence for the Gascoyne Food Council. What can we expect from you from here?

SUE HELMOT: To be honst, I don’t really know yet. I’m just really focusing on tonight and bringing this to the community for the next couple of weeks. Painting is what I do, it’s my profession. I’m certainly going to keep painting I’ll be continuing to paint and be inspired by the Gascoyne. I can’t give you any firm – stay tuned I supposed. It won’t be the last you’ll see of me, put it that way.

MICHELLE STANLEY: Well congratulations on a beautiful opening night, and people can come down over the next couple of weeks in Carnarvon and check it out.

SUE HELMOT: Absolutely. I’d love people to come down and just experience this and be a part of it. And hopefully it does strike a chord with them. I’m just very happy to share it. 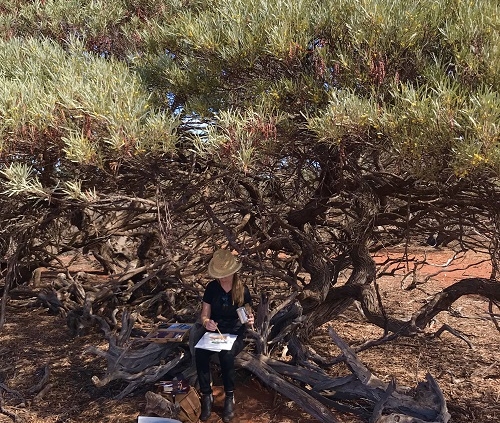 Click here to listen to the interview on abc.net.au 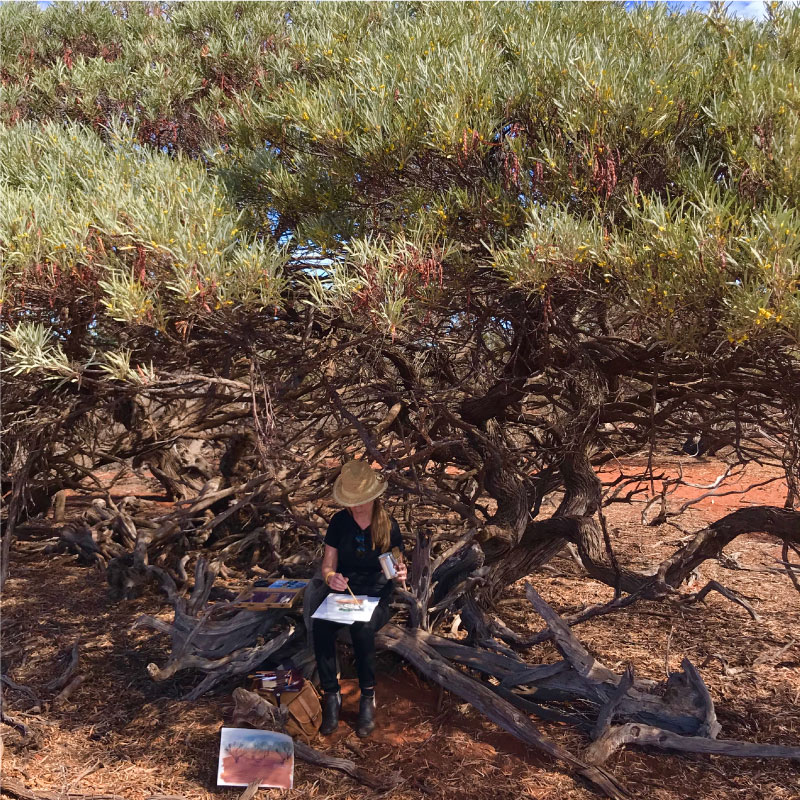 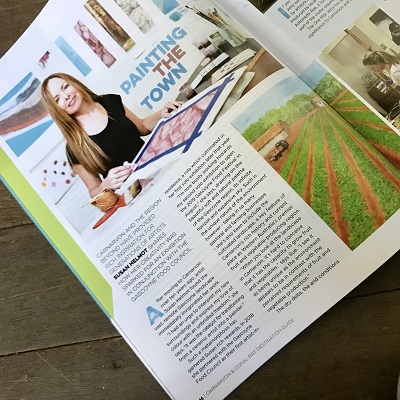 Thrilled to be featured in the 2019 Carnarvon and Coral Bay Destination Magazine to share what inspires my art practice and work during my residency with the Gascoyne Food Council.  What an honour to be included amongst so many other local businesses who are passionate about providing unique and high quality experiences to our community and visitors to the Region. 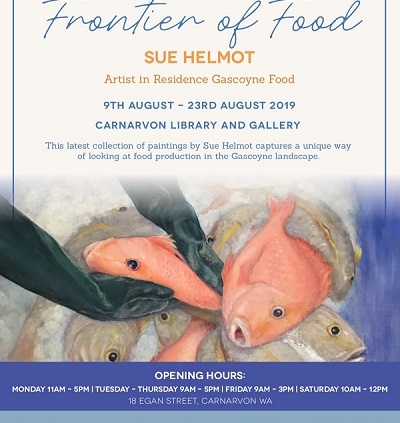 Sue Helmot’s next solo show ‘Frontier of Food’ will showcase Sue’s new collection of paintings inspired by food production in the Gascoyne landscape. “When you look at the landscape in the Gascoyne, it’s hard to conceive that it has the capacity to grow fruit and vegetables and graze livestock.  I see it as being unique as the environment  where the dry delta and baking sun bely the region’s secret power:  it’s a frontier of food that demonstrates perseverance, initiative and innovation in order to succeed against the odds. The raw beauty of landscape itself plays an equality large part in my work.  The Gascoyne has a wild energy that’s difficult to describe in words but readily expressed through my art.” Sue Helmot

‘Frontier of Food’, opens on the 9th of August and runs until the 23rd of August at the Carnarvon Regional Gallery/Library as part of the 2019 Gascoyne Food Festival. 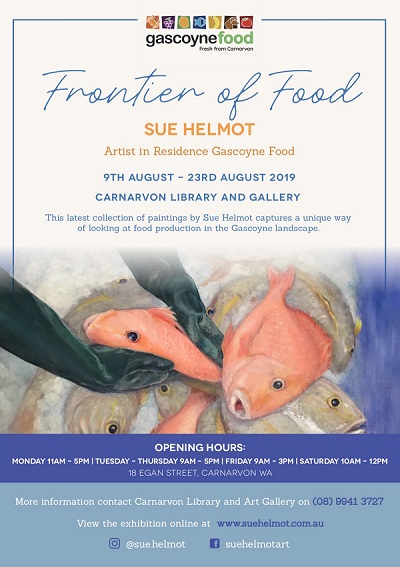